Here's my third Number 4 smoothing plane. A Record made in England during the late '60s or early '70s. I'm not really too knowledgeable about this brand of plane.
As you can see, it arrived with in pretty good shape. I think the seller tried to clean it up some, and also tried to make the handles look better. You can see in the above picture that the stain was sanded away in one spot on the base of the tote.
I used to not have a good opinion about frogs that had cavities like this in them. I thought it was the manufacturer trying to cut corners. After my experience with the English Stanley, I have a bit more open mind. What I don't like is it looks pretty rusty.
The blade and chipbreaker didn't come in very good shape. I think they were superficially cleaned, but they weren't sharp or tuned at all. I didn't even try to make a cut with it yet.
The finishing touches on this casting have a little to be desired. I thought I'd give it due diligence, however. I did have to run the casting and the frog on sandpaper on a glass plate.
One thing I really did like was the design of the chipbreaker. Below is a picture of the blade assembly from the Stanley as well as this one.
The chipbreaker on this Record is much beefier than any stock chipbreaker I've seen in the past. Experience tells me that a solid chipbreaker is a fantastic upgrade to any plane. This one came from the factory with a chipbreaker that I would say is an upgrade over the Stanley design.

To tune this up I ran the edge on my stones until I had a nice flat all the way across, 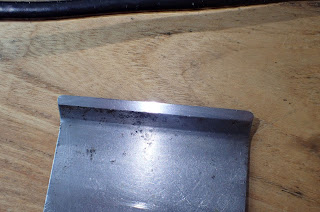 Then I rounded and polished the front of the chipbreaker to make it easy for the shavings to glide past it.
I decided to give the same shiney-up treatment to the brass on this plane as I did the Stanley. This time, I started by letting the brass sit in some salted vinegar for a minute. This was a good time saver. Most of the gunk and "patina" just wiped off. It was then an easy job to polish the brass with toothpaste. This step saved a lot of time over starting with the toothpaste.

The handles were pretty easy. They were in decent shape. I just sanded them down to a fine grit, then I waxed them with my homemade wax, and I finished up with a coat of shellac. It's the first time in years that I've used shellac, and I think it is perfect for this job.
After the shellac dried, I went over it with a maroon scrubby and gave it another coat of my soft wax.
It isn't the most beautiful plane I've ever seen, but it does have a nice character to it.
Enough of the rehab. How does it work?
Wow!

I have to say it again.

This plane really surprised me. It works fantastic.

I expected it to work well after my experience with the Stanley. But I was expecting the blade to be of lesser quality, or for it to chatter or something.

I was a bit worried about the blade being in bad enough shape that shavings would get under the chipbreaker. I did have to resort to using the ruler trick to avoid spending two days lapping the back. That didn't happen, however. It is as good of a blade assembly as any I have.

This next part might sound a bit snooty and wonkish, but if you use oilstones to sharpen you will know what I mean:

The steel in the blade is superb. A lot of what I base that on is how it "feels" on the stone, as well as the sound it makes. Both when sharpening and when planing wood. This is one reason I don't like A2 steel and waterstones. Not because they don't work well, but that "feel" isn't there.

The Stanley blade feels course. Even on my finest stone. And when I plane wood, it gives a raspy, hollow sound. It works great while it is sharp, but it must be sharpened often.

The Ray Iles blade I have is superb O2 steel, and it sharpens up very nice. It sits very solid in the plane and the noise it makes is very satisfying. I must say that I didn't try this blade in the Record yet.

The Record blade has a really nice, slick feel on the stones. It sharpens up to a razor edge in no time, and it seems to stay sharp a long time. I would guess longer than the Ray Iles blade. It's amazing! And paired with that beefy stock chipbreaker the blade assembly is fantastic. The sound the plane makes when cutting wood is very satisfying.

I used this plane to get to know it exclusively during my humidor build. After that I finished a shelf and started another project. I've had my choice of three No. 4 smoothers to use for these projects, and I found myself reaching for the Record every time.

I'll certainly have to do some more playing around with these planes to see which one winds up permanently in my tool chest. But I wouldn't be surprised if it was this Record.

I'd love to hear what you think of your Record plane, or any plane for that matter.

I've looked at three planes so far, and you can find my thoughts on the Stanley USA type 12, and a Stanley made in England.

Will there be more?