Her:  Did you eat your orange?

Me:  No. I was going to have a grapefruit, but I had donuts instead. 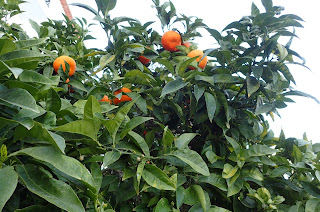 Email ThisBlogThis!Share to TwitterShare to FacebookShare to Pinterest
Labels: Me 'n' Her

Heeding this hashtag is the best thing we can do at the moment to help curb the spread of the current pandemic. Unfortunately, staying at home is also crushing many small businesses. In my opinion,  patronizing businesses that are still open is crucial to helping everyone get through this situation unscathed.

I think that boutique tool makers are at a high risk of shutting down. To do my part, I decided to order a new, fine grain modeler's rasp that I have been thinking about getting for several years.

I decided to get one directly from Liogier, because about five years ago I got one of their cabinet maker's rasps, and I love it. I had planned on doing a review on my new modeller's rasp once it arrives, but I realized that I have never written about this cabinet maker's rasp. Here is my long-overdue review.
I used to think that a rasp was a course, slow woodshaping tool that was probably only slightly more effective than a rusty butter knife. This was before I had ever tried a quality, hand-stitched rasp. I was able to try one at some point, and was hooked.

While looking for a rasp, Auriou was a French rasp maker that kept coming up. The Auriou rasps I've tried have all been very, very good, but at the time (2015) Liogier rasps were a little more in my budget. Liogier is also a French rasp maker that hand-stitches rasps. I figured I would give this one a try, and if I didn't like it, I could always get an Auriou.
I wasn't really sure what to order, so I ordered the biggest one that I thought I could afford, an eight inch rasp in grain 11. They have two different models, Traditional, which is what I ordered, and Sapphire, which sounds like it is heat treated to make the rasp stay sharp longer and resist rust.

I went with the Traditional, because I figured there was little point in sinking extra money into a tool if I didn't like it.

I was impressed with the rasp when it arrived. It looked awesome, felt sharp and had a comfortable wooden handle. I instantly realized that I didn't get some bargain knock-off attempting to look like a quality, well known tool. This was the real deal.
I was shocked when I put it to wood. Grain 11 is on the fine side of medium, but this rasp removes wood very aggressively, and leaves a surface that needs very little cleanup.
I use this rasp whenever I have a curve that needs cleaning up after roughing the shape with a bow saw. It also works great for chamfers, and rounding over parts.

I tend to be rather tough on my tools, in fact most of you would probably be horrified if you were to peer into my tool chest. However, you will always find this rasp carefully stored in the plastic tube it came in. More than any other tool I own, I feel the need to keep this one nice, as it is by far my best rasp.

In fact, when I came to Spain to be with my wife on her temporary contract, I left this tool in my toolbox in Germany so nothing would happen to it. I love when I get an opportunity to use it, because every time it surprises me with how easy it is to use.

Therefore, I had no problem ordering another rasp from Liogier two days ago. I know it will be good. I recommend you get one, too.

For full disclosure, I am not affiliated with Liogier in any way. However, I have been in contact with Noël Liogier. This was because I was having difficulty using my credit card on his site. It works now, but in the email conversation I asked how business was going during the lockdown in France. He said it was tough, because none of his retailers are making orders with him. He asked if I was on a forum or if I had a blog, if I would give him a shout-out, and I said I would be happy to.

If you have been thinking that you need a rasp, or any other woodworking tool for that matter, it might be important to place your order sooner rather than later. Your order may help a boutique tool maker stay in business and weather this storm.
Posted by Brian Eve at 10:28 AM 6 comments: