I have no idea why, but this project has elicited very little excitement from me.  I'm sure it will be cool when I am done, but the motivation to work on it has been low.  I bought the lumber about 18 months ago and basically all I have done to it in that time was run all the boards through a surface planer.

I decided that this has to change, so I recently started working on it again.  I am hoping that putting it up on the blog will give me that extra "have to" to finish it.

Lately, I got the boards laminated together for the top.  I spent a couple of days when I first got this lumber laying it out to make it look pleasing, and I think I did OK with what I had available.  It was now just a matter of jointing the edges and gluing them up.

Doing a big table top (this one is a bit over 150 cm long and 90 cm wide) increases the complications with gluing up a panel exponentially.  Add to that, that I wanted to do it all with my LV BU jack plane just because I could, and I was busy for a few days.

Most of the joints went together easily, but there were a couple that took a while to get right.  It is weird how that works.  All went OK and I got it all glued up pretty much to the standard I envisioned.

Last weekend I got to start working on flattening.  I started on the underside.  There were a few boards that were proud of the others, but overall it was a good glue-up.  I was happy.  I continued to use my BU jack, but I did use a toothed iron to go cross-grain for heavy cuts.
I haven't ever flattened a panel this big by hand before.  My bench top is less than two feet wide, and that makes a big difference.  Pushing this plane across the grain for more than 90 cm was a real workout.

Oh, I forgot to mention, the table had a bit of twist in it that I had to plane out, too.  Luckily the underside doesn't have to be that pretty, as it was definitely functionally flat as opposed to a glass-smooth surface.

When I started the show surface, I knew from experience that there was a lot of wood to remove, but I had to be careful not to let any of the massive tear-out occur that happened on the underside.  After a few careful passes with my toothing iron, I gave up.  This particular walnut has some spots that either are soft or the grain is going crazy, or both.  There is no way I can bring the surface down with this plane making it look neat with no tear out.

There was an old Stanley #5 there that was rescued from the dump who knows how long ago.  I asked the owner if he minded if I grind a radius in the blade, and he didn't as he has had that plane for decades without ever having used it.

I ground an 8" radius on the blade, and honed it to a state of "sharp enough."

I am amazed.  I haven't ever used a vintage Stanley like this before, and it worked pretty much perfectly to flatten out this panel without gouging out giant chips from deep within the middle of the panel like the toothing iron did.
I have used in the past my scrub plane, which has a 3" radius.  I would say the difference is stark.  The scrub with the 3" radius is perfect for actually reducing the thickness of a board, where this did a fantastic job of doing the rough part of flattening this giant panel.  It is a thick top at 40mm, but I wasn't looking to bring it down to 4/4, just bring it down to a state of flat-enough-for-a-dinner-table.

I have taken the parts for the legs home to my own bench to get them ready.  I am laminating the legs together.  Each leg will be however square I can get them laminating two 40mm thick pieces together.  Probably about 75mm square or so.  I am planning on veneering some walnut veneer on the edges of the legs that show the lamination joint, similar to how I did the legs for the in-law's oak table I finished about a year ago.


The Frau votes against this idea, she thinks that it will be obvious that some of the leg faces are veneered, but I think it will look better than showing that big lamination seam.  I'll have to test it to find out.  In the end, I think it would have been better to spend a bit more money on some thick stock to make the legs from one piece of lumber.

The other thing I haven't settled on yet is the final design.  More on that in a following post.


This project was one of the most enjoyable I have ever done.  The thing that made it so great was when I started, I didn't have a clue as to how to do it.  I didn't know how to box the insert, and I had no idea how to make the oval shaped profile on the beam.  The joy in this project came from figuring those things out and watching this project take shape.

I have put together another slide show of the last part of this project.  I couldn't help but take a bunch of artsy photos of the completed project.  This one is just too easy to take pictures of.

In fact, while it is sitting in front of me, I can't quit staring at it.  My wife said it is too nice to use.


Toss the feathers - Otter's holt (Aislinn) / CC BY-NC-ND 3.0
I haven't tried it out yet, so I'll have to see how it works.  While working on this project, I thought a lot about how this gauge was put together and how that design must perform in use.

When I first got the vintage model, I thought it was a left-handed version.  I usually hold the stock of any marking gauge in my right hand, as I'm right handed.  This one looks as if it is meant to be registered on the left side of a board while being marked.  When I used it, I just turned it around and used it "backwards" with the horn facing forward. Then I saw this picture in Salaman's Dictionary of Woodworking Tools:
It is the same.  Perhaps those old timers knew something we don't?  Then it hit me.  If the board to be marked is placed on a saw bench, it can be marked registering the panel gauge on the left side and marked on the right.  After marking, it does not have to be flipped end-for-end to start the rip, as you would have to do if registered from the right side. You can mark the board with this gauge and rip right away without movin g anything.

This is faster!  Mary May talks a lot about learning to be ambidextrous while carving so you don't continually have to adjust what you are working on.  This could be a result of the same principle.

I also have a concern about using a blade as opposed to a scratcher for marking.  A blade should leave a nice, neat line, but there is always a danger of a knife blade following the grain of the wood where a scratching blade would not.  After all, ripping will require cleaning up, anyway.

Lastly, this blade only works in one direction - forward.  Being a single bevel blade, I forsee problems if I try to pull the gauge toward me.  I'll try it out, and if it is a problem I may try re-grinding the blade to a spear point configuration. The great part about this single bevel blade is it should be easy to sharpen freehand.

AAR:
Just in case you would like to make one, here are the specifics: The scratch stock is part of a 2 1/4" circle.  You can use the template for marking out the beam mortise, and the scratch stock also is used to shape the head stock, as opposed to rasping a chamfer or roundover. I used a #7 Jennings bit to start the beam mortise.  The original beam was 24" long.  Mine is a bit longer. The beam's wedge is 3/16" thick. Here's a scan of the headstock: 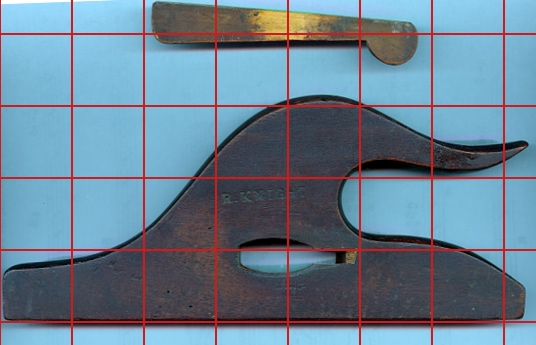