I have had a rare opportunity in these parts. I got to play with a bunch of wooden plow planes for the last couple weeks.

A while back I sent my favorite old-tool seller, Joshua Clark at hyperkitten.com a note explaining that I was looking for a new wooden plow plane. He responded that indeed, he had four that looked like good users that he matched up with irons that fit (not always an easy feat with old plow planes - there seems to be no real standard that I can see).

Long story short, I couldn't decide, and he agreed to send them all to me to test out. What a guy!

The last coupla weeks have seen very little progress in my shop, but I did get a chance to get down there today to see what these babies could do.

Unfortunately, my camera is elsewhere, so you'll have to rely on the photos I took when they arrived.

To give myself a frame of reference, I sharpened up a couple of blades for my Veritas small plow plane, and gave it a run through some laminated beech I had laying around. This plane works really well. Except today, like has happened in the past for me, the depth stop slipped and I blew well past the depth I had intended to go to. Time to see what the old woodies can do.

First up was a beautiful solid boxwood plane with screw arms by Kellogg, Amherst.


I was a little worried that being boxwood, this would be more of a collector than a user. But, the wedge is a replacement of some 'not-boxwood' wood, and all of these plane came with replacement blades, as far as I can tell (I'm no expert). 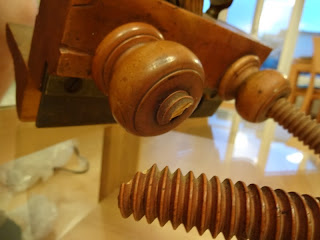 Unfortunately, this plane arrived with a broken screw arm. Josh was able to claim it through his insurance, but what a shame. Perhaps someday someone will be able to fix it.

I thought I would give this one a test, anyway. There is enough of the screw left to use near the edge of whatever you are grooving, such as drawer bottoms.

Strangely enough, the front skate was too close to the blades that I tried. There actually is no room for a shaving to escape up the blade. It caused this plane to clog. I suspect if one wanted to either mess with the blades, or the front skate, this plow would work great.

Next, a gorgeous handled screw-arm by Auburn. 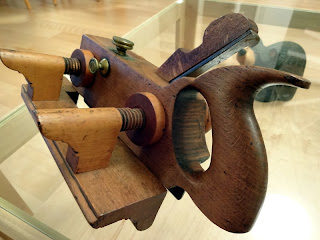 This plane is beech, with a few boxwood accents.

I had a few problems with this one, too. The screw arm was a bit loose, so one had to be careful to ensure it was parallel to the skate. Also, this one had difficulty cutting because there was once again not enough room between the blade and the front skate. My guess is that this and the Kellogg plane both had original blades not as thick as the replacements Josh found.

I bet with some work, this plane could work well. It sure is pretty. The handle is super comfortable and would make this plane easy to use.

Next, I tried a wedge arm plow by Dixon, London made of beech with boxwood wedges. 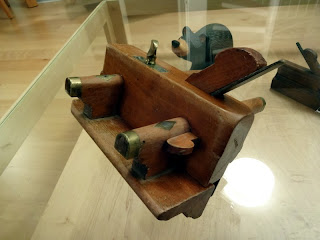 This is a sweet little plane. This one finally had some room in the mouth and made some decent shavings. One problem I noticed was that the screw for the depth stop was not long enough to set the depth gauge to a shallow cut. Replacing that might be a problem. But, if one didn't mind cutting to a line, I'm sure it would work fine.

The last one I tried was a neat early American plow plane by D&M Copeland. 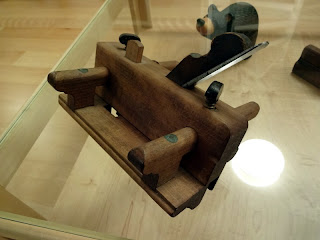 I thought this one was neat because it has three wooden screws for securing the fence arms and the wooden depth stop. I have not ever seen one like this before. I had the best luck of all getting this one to cut. I found the adjustments simple, and they work.

The easiest cutting of all was by far my Veritas small plow plane. However, this is not really fair. I actually am used to my Veritas, and I know how it works. That can not be said about any of these wooden planes.

I think that all of these wooden planes could be fine users. However, they all need a little fettling. Being that I was just trying out these planes, I did not feel comfortable doing anything other than touching up the blades on my waterstones. I am sure that once these blades (actually, I think bits is the correct term for plow cutters) are truly sharp, the plane would certainly perform better.

So, I am buying the D&M Copeland. It is not the prettiest plow plane I have ever seen, but I like the adjustments, and my guess it will not take as much work to put into peak performance mode.

Once it is working it's best, I will do a side by side comparison of it and my old Veritas.