This project wasn't so much a work of fine furniture as a DIY project with handtools.

It is another project in the house with the beam that I posted about recently.

I wanted the shelf to look nice, be durable enough for a bathroom, and take the minimum of shop time to construct. This is what I came up with: 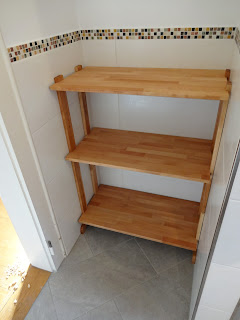 Like usual, it took quite a bit longer than I anticipated, but it still was a quick project.  There is no glue and no fasteners.  This shelf stays put because it is in a nook supported by three walls. 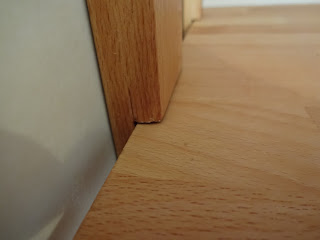 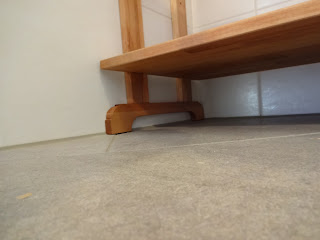 Since it is a bathroom, there is a good chance that standing water will wind up underneath the cabinet.  Knowing that wood sucks up water through the end grain, I decided to take a page from my old workbench and make feet with long grain to eliminate this problem.

One of the biggest experiments with this project is I tried out a new finish.  I read about it in a Fine Woodworking article from a while back.  It is Spar Varnish sanded in wet and wiped off.  I thinned it with a solvent for the first coat, sanded with 120 w/d paper (the article said to start with 220, but I didn't really do any preparing of the surfaces like I usually do:  I just took the plastic off of these boards and slapped the finish on).

I still had a lot of this thinned finish left, so instead of wasting it, I used it with 180 for the second coat.  It looks nice, and I think I'll leave it at this.  Except, there is a little bit of the slurry that didn't get wiped off of the shelves properly, so I probably will go over those parts with one more coat at 220 and call it good.

Jonathan at the Alaska Woodworker recieved the Inter Continental Boring Machines that I sent him a while back.

I had these laying around for a few years waiting for me to figure out how to get them working.

It took him about five minutes.

Panel Gauge In Use

I never knew I really needed a panel gauge before tonight, when I used one for the first time. 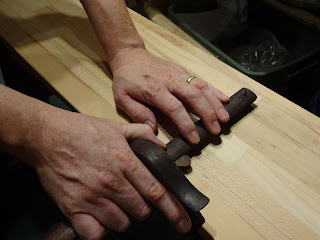 In the past I made due with a regular marking gauge. That, and I avoided ripping by hand as much as possible.

I recommend avoiding ripping, if possible. But when you do, I heartily recommend a panel gauge. I had a board tonight that I had to rip into four equal widths. I stepped off the distances with a pair of dividers, and marked the lines with my new panel gauge.

A few posts back, I wrote about this new panel gauge I got on eBay. I actually didn't intend to use it, but to use it as a pattern to make one from scratch. Then use that one.

Well, long story short, I hadn't got around to making it yet, and I needed one tonight, so I pulled out this vintage one. The boxwood wedge holds very tight. The pin is a replacement, I think. It is a nail that someone pounded in and filed.

I didn't sharpen it, but it still cut a fine line in the beech plank. When I use a regular marking gauge for this purpose, it tends not to be that accurate because the narrow face becomes more unstable the farther out it is set. A panel gauge has a much wider fence which keeps the beam plenty stable.

I highly recommend purchasing or making one.

I Shot My Finger Off!

Then, for good measure I thought I would try what it felt like to gouge a big hole in my arm with a mortise chisel.

I've had better days in the shop.

Today, I intended to finish the shelf project I am working on for some friends. The project is turning out, except for when I cut something too short and had to go buy another board.

This project is interesting, because it has some good paramaters:

On with the safety message:

One should try not to rush a project, no matter how fast you want to do it. While planing end grain on my shooting board, My index finger got in the way during the stroke. Let me tell you, your plane will take a much thicker shaving out of your flesh than it will endgrain beech.

After some swearing and a bunch of band-aids, I was back at it. Next, I had some mortises to chop.

On the last stroke, my chisel got stuck in the stock. I pulled hard with one hand, while holding the stock with the other. The chisel jerked out, and my natural reaction was to try to stop the momentum once the chisel was free. I then felt a scratch on my fore arm. Looking at it, I realized how sharp my mortise chisel still must be, as there was a nice crimson arc on my arm, ending with a pretty deep gash.

At this point, I decided to stop for the day.

I took lots of pictures of this project in progress, but wound up leaving my camera elsewhere. I promise there will be pictures of the project when I finish it.

The Frau and I are helping some good friends out with a massive renovation project they have. They have an older house here in Munich that was built in the 1930s. It has been a while since the last renovation, so they thought it was time to have contractors come over and redo all of the bathrooms.

The contractors did a nice job on the bathrooms, but now it is clear there should be some sprucing up of the rest of the house, too.

While they and their four kids left town for a two week vacation, we talked them into giving us the key to their house so we could have our way with their upstairs.

The upstairs is a former self-sufficient apartment that they basically only use for storage now. The plan is to make the upstairs a nice mom & dad only zone with the new bathroom, a new bedroom, and a walk-in closet that was formerly a kitchen.

Unfortunately, I didn't get before pictures, but the kitchen had a built-in cabinet in the corner that needed to come out. When I pulled the cabinet down (they don't build built in cabinets like THAT anymore!) a structural beam going from floor to ceiling was exposed.

After inquiring, our friends let us know they wanted the wooden beam featured in the room, rather than painting it or covering it up with sheetrock.

It was a mess, though. It was covered in plaster spatter from when the walls were originally done, and it was very rough.

The Frau spent a few hours yesterday cleaning it off, and this is what it looked like when I got there after work today: 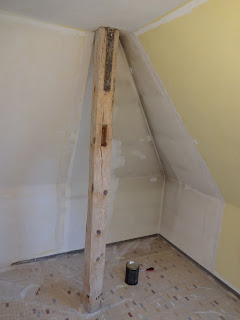 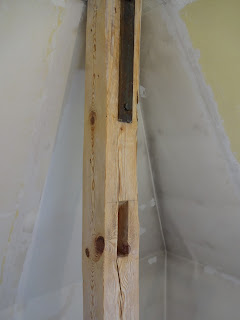 After consulting around the internet, I decided the best way to proceed was with scrapers.

After four or five swipes with a card scraper, I realized this wasn't fine cabinet work. This beam needs to be smooth enough that it will invite people to touch it, but it will not get a French polish.

So, I went snooping around my friend's work room until I found a random orbital sander. Actually, this tool used to be mine. I gave it to him when I decided I probably wouldn't use it anymore.

It only took about 20 minutes to sand the whole beam down to 80 grit, which turned out to be fine enough for this project. I spent a little more time sanding out the chatter marks from the knots, and I was done.

To finish it, I decided to take a note from my tool building and use boiled linseed oil.


I used a trick I learned finishing a dining table of heating up the BLO in a double boiler before applying it. This 80 year old pine beam was super dry, and sucked the oil in like crazy. Using hot oil allowed it to suck even more. Hopefully it will only take one or two more coats to finish.

Speaking of finish, here is the after shot (at least prior to us painting the room):


A couple more coats of BLO over the next few days and it will be done! Unless I decide to put some wax or something over it. Easy peasy!

Next, I am making a shelf for the new bathroom.