I recently got back from a trip to the US, and I have to write a catch-up blog or two. I made a couple of things there and I think I should blog about them.

This, however, isn't one of those blogs.

Right before I left, I was commissioned to build a boarded book case. I just finished it and I think it turned out very well.
The client needed a bookshelf for his children's books. He gave me the measurements of his biggest books, and I came up with the design for this particular piece. I borrowed heavily from Christopher Schwarz's boarded book case in the Anarchist's Design Book.

I used some of my favorite plastic-wrapped laminated pine from the home center. I really like the stuff here because it is a good quality, and the laminations always are full-length. There are no end-to-end laminations in this stuff. Also, I can usually find boards that are mostly straight and have few knots.

Since it was intended to be used with kids, I borrowed one of my wife's pot lids from the kitchen to lay out a roundover on the top front edges. If I forget to mention it later, I cut it out with my Dick saw, clamped the pieces together, and cleaned everything up with a spokeshave and a rasp.

I started this project out by cutting the boards to length according to my cut list. Then I went to work on the dadoes.
A while back I bought an old Record 071 rabbet plane from eBay. I've generally been happy with it, but there was a little crack in the very edge of the blade that prevented me from getting it as sharp as I'd like. While I was in the US I picked up a set of Veritas replacement blades. It turns out they fit perfectly by dropping them in. I was able to sharpen the regular wide flat blade with no trouble to a very sharp edge.
Once that was done, I drilled pilot holes and temporarily screwed the book case carcass together with some cheap screws.
I made a slight design change here from what was in the book. Instead of making 1/2" rabbets for the back boards to be inset, I used the same 3/4" laminated pine boards for the back, nailed flush rather than inset. My thought was it would give me an extra 3/4" of depth on the shelves.

Plus, it was easier.

It turns out that once I got to this point, I realized the boards I had for the back were about a half inch to an inch too short. If I nailed them flush with the top of the bookcase, there was a gap before the board got to the bottom shelf. Ooops!

To fix this I decided to glue and screw a backer to the cross-rail that I had already inset into the top of the case. It was about half the width of that cross rail, so the back boards now go from that extension all the way beyond the bottom shelf so it looks just fine.

As an added benefit, there is a lot less endgrain showing on the top of the case now. Only a little on the sides that has been painted.
I didn't bother ripping the back boards to width before I nailed them on with no glue. I centered them the best I could, then I ripped the extra off after it was nailed on.
Since the back boards don't go all the way to the bottom, I decided that I would count this as a feature: it leaves a little space so the shelf can be pushed up against the wall without having to muck with the baseboards. To make it look right, I just trimmed a triangle shape on the bottom so it looks like a 45 degree cut from the side.
I left gluing the toe-kick for last. I actually forgot to account for this piece when buying wood, so I had to use a piece of scrap pine that I pulled out of a dumpster. The color on it was far different than the rest of the piece, so I painted it before gluing it on.
One thing I did before gluing on the toe-kick was to put two coats of a commercial chalk paint on the sides. I lightly sanded it with a maroon scrubby pad after each coat, to keep everything nice and smooth.

Once the paint was on, I could replace the screws with Roman nails. The large heads of these nails cover up any evidence of the screws.
I don't always do the screw before nail trick. It does add a little time, and one also risks really messing up the paint job with an errant hammer blow. These dents can be fixed on bare wood a lot easier. That is, as long as they aren't too bad.

Luckily I only had one French mark on this case, and it wasn't too severe. If my client doesn't read this blog, he will never know.

All that was left at this point was to chamfer the sharp bits and add a coat or two of BLO.
Once everything was done, I applied BLO with a paint brush, let it sit a few minutes and then wiped it down with paper towels. I started on the inside and did the painted parts last.
This chalk paint covered nicely in one coat with no need for a primer. I used two coats, however, just to make sure that I wouldn't rub through the paint during this stage. 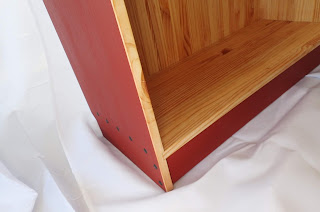 I slathered oil on the nails and everything. I would only suggest not to rub the paint too hard as some of the paint does come up once it's been drenched in oil. After wiping the oil down, my towels had plenty of paint on them.
After the oil is on, the shelf looks really good. I decided to have the client come over and take a look at it before I bother to wax this piece. Wax can go right over the BLO after a week or so when it is cured. It probably could go on it after a day. 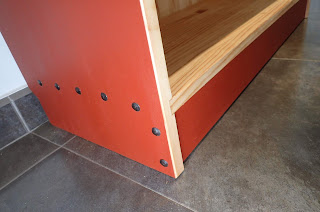 I think it turned out well, and I am glad I spent the time to make every little joint the best that I could. This book shelf isn't perfect, by any means, but I was happy to sign my name on it. Hopefully the client will get many years of enjoyment from it.
Posted by Brian Eve at 5:44 PM 10 comments: