I recently built this tea tray from Charles Hayward's writings in the Lost Art Press' printing of his works, The Woodworker, Vol. III.
I've made a quick slideshow that shows the entire build:
This build was a lot of fun. I don't often build strictly to a plan. Usually I substitute joints for ones I think would work better either for the design or for my tool set. Sometimes I build a piece on the fly, and design as I go with a general idea of what I want to do in my head. For this project, I decided to stay as close to the printed instructions as I could, just to see how it would work.

Most of the work for me was in milling the lumber on hand into thicknesses equal to what Charles Hayward used. I resawed some laminated pine I had for the main panel from 18mm down to 1/2". I also had some sycamore two inch posts that I cut down to 5/8" widths.

I did run in to a few problems with this build. Just in case you would like to build one, perhaps this info will help you.

First up, I re-did the cut list because there was an error in quantities. It was also listed in feet and inches. Iprefer than just inches.
Next I cut the pins on a board in the wrong spot. Notice the long pieces are a different width than the short pieces. This facilitates rounding over the top edges of the tray without having to figure out how to deal with the roundover where the dovetails meet.

I chose to repair this goof rather than cut it off and make the tray a little shorter. I wanted to see if it could be repaired with a decent looking patch. I think next time I do this I'll do a better job, but it looks good enough for now.

After that was a giant goof-up on my part. There aren't many pictures in the article, and I was mistaken in what I thought it said to glue up. For some reason, I didn't even question it in my head. I glued the base to the upper part rather than screw it from below, as stated in the instructions.

The problem with gluing the base is you are locking the panel in the base to a specific width, without allowing for the fact that the panel will expand and contract over time. I have no doubt that it won't take too long before I get this tray back with a cracked base or some other catastrophic failure. When that happens, I'll fix it by doing it the correct way: no glue, screwed from the bottom with the clearance holes in the base a little oblong so the wood can move past the screws.

I might have even just nailed the bottom on if I had been thinking.

I might get lucky, because pine can be a pretty stable wood once it has fully cured. Time will tell.

Last, I had a difficult time understanding what I was looking at in this picture:
I thought it was a bit odd that Charles Hayward was going to trust a small, cross-grain glue joint to hold the tray, a hot pot of tea and who knows what else without the tray crashing to the floor. I wrote this concern off because I figured if Charles Hayward thought glue alone was enough to hold it, then it must be fine.

I came up with making these parts in 1/8" sycamore: 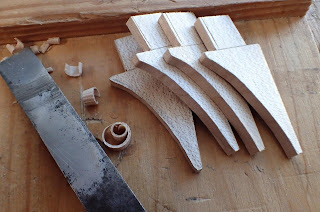 What I realized later is that CH said to make a slanted rabbet which would give this part a bit more support:
I've made a couple drawings to better illustrate what I mean:
I think if I were to do this again, I would make this piece out of 1/4" stock, so I would have a full 1/8" for the rabbet. I probably also would sink a dowel through the support and into the endgrain of the handle in case the glue joint fails.

Once I figured out my way wasn't going to hold, I had to come up with a way to fix it. I decided to use bamboo skewers as dowels to reinforce the joint at a 45 degree angle. 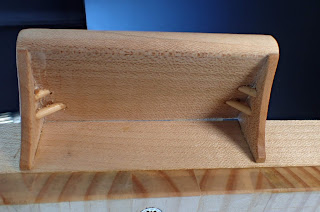 They can only be seen if the tray is turned upside down, and you can hardly feel them when the tray is grasped.
After I did this I realized an easier fix would have been to use another piece with a square top to laminate to the side of the tab. This would indeed be a valid way to make the piece from the beginning, bypassing the fiddly job of making such a small, angled rabbet.

In the end, I decided all the faults of this tray did not detract from it enough to prevent giving it to the intended recipient. She was thrilled, and thought it looked very nice.

I just told her if the base starts to rock or if it cracks, to bring it back and I'll fix it.

At least I used hide glue, which is reversible.
Posted by Brian Eve at 12:04 PM