Jonas gave me some grief today for not posting about my recent table I finished. To keep him off my back, here is my write-up!

Earlier this summer I was back home in Germany, and that trip in June turned out to be a woodworking dream vacation. I got to see a lot of my old woodworking friends over the summer, as well as meet some new ones.

One of them helped me clear out some lumber from my Munich shop which reminded me I had a neat hunk of Zebrano, or zebra wood (Microberlinia brazzavillensis), intended to be a console table and a nice board of American black walnut (Juglans nigra) for the base. A local carpenter, Nils, sold me the Zebrano and suggested I pair it with walnut.
I actually like using hand tools to break down lumber for staked furniture. It makes it possible to get arrow-straight grain this way, which works best. I didn't have to worry about quarter sawn or flat sawn this time, because the intent was to octagonalize the legs which means the grain orientation isn't so critical as when using square legs.

The first leg always sucks to cut out because it takes two rips, where the rest only take one.
It sucks having two shops. Mostly because now I am used to the tools I use in Spain, and using others isn't as familiar. For some reason I sharpened up a couple of old planes from my pile that I haven't really rehabbed yet and used those. It wasn't until I finished the legs that I remembered I had a couple of sweet bench planes that were super-tuned and in a box I didn't find right away.

I have to get rid of all that crap next time I'm there.

The next job was to taper the square leg blanks. I have made a lot of staked furniture with the wide part of the taper at the floor, but I wanted a more modern look for this one, so skinny part to the floor. Either way, the process is the same. I marked a center point on each end, and measured from the center of the end to determine how much to take off on the taper. I then just drew a pencil line from one corner to my mark, and planed down to the line.

Sixteen times for four legs.
Here's a picture of the planes I used for the tapering. A ratty old Swedish jack plane that takes monster thick shavings. It makes this job go quickly. My BU jack won't take shavings half as thick as this plane will. I also used my home-made Krenov style jointer. It worked beautifully, but I eventually broke the center rod on it. I've glued it back together before I left, and haven't checked to see if that repair worked or not. The last plane I used was a sweet Ohio O4 smoother. It works great, but I think it will work much better once it has been given a rehab.

After the square legs were tapered, I octagonalized them. I used my pencil marking gauge that I got from Olav. Then I just dropped the leg on my Moxon vice, and planed down until I was approximately at the line, and eyeballed from there.

There are more precise ways to octagonalize, but I'm getting better at this method. It's quick and easy.
Once the legs were done, I moved on to the top.

Oh, by the way, we're now on my second trip to Germany this summer.

I figured out the rake and splay by holding the legs up in different ways on the top until I got a satisfactory look. Then I determined my sightline and the sighting angle so I could duplicate those angles on the other legs. In other words, I eyeballed one, measured it and copied those angles to the other legs.

I wound up aiming for 5 degree rake and 7.5 degree splay. Is that what I wound up with? I have no idea, but they all line up and look good.
I was so excited the legs turned out to fit in the table so nice, that I immediately glued and wedged them into place.
I showed it to the Frau, and she was the one who actually requested I not use stretchers. It is a light duty table, and the tapered tenons will be plenty strong enough on their own, so I dodged a bullet there.

As far as shaping the top, I had to do some shaping that I could do with the table assembled. I originally wanted to put a heavy chamfer on the bottom so the top looked a lot thinner than it is. The legs made that a problem, so instead I decided to put an upside down bevel on it. I chose a 5 degree bevel which is hardly noticeable in the photos, but it is there and gives the top some interest.

A big problem I had with the Zebrano is that has crazy grain that switches in random spots. I could get my supertuned #3 to be planing along perfectly, when the next swipe would have backwards grain half way along. At one point before I put the legs in I had it looking OK, but not after.

I had to break down and use sandpaper.

I don't like to use sandpaper for many reasons, but one important one is my shop is in a room of our apartment building where I share storage space with the other tenants. Too much dust and they can forbid me from woodworking in that space. I don't want to get kicked out of my shop.

Hopefully I won't have to do this again.

I started with 40 grit sandpaper on a cork sanding block, and went to town until all of the tear out was gone. Then, it was an easy matter of going through the grits. I think I stopped at 300. It left a very smooth finish.


I finished the table with some pure tung oil. I applied it just like I do BLO: I sloshed it on with a rag, and buffed it out after 10 or 15 minutes. 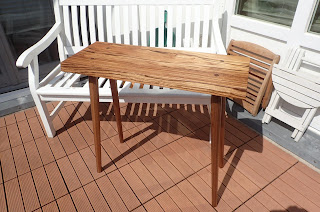 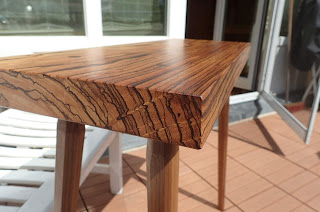 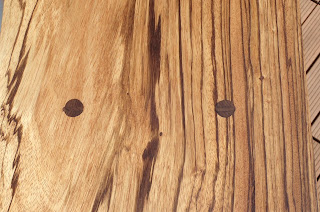 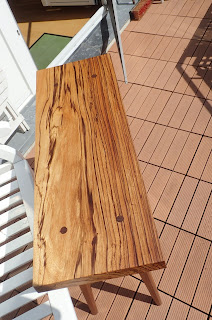 The Frau is happy with this table, although she would have preferred non-staked joinery. I like this kind of build because it is really quick and dirty, and can be completed in a single blog post.

We need another console table in Spain, so I will build it the same way as this, except I'll use dumpster wood.