I Made a Marking Knife


After screwing up my latest attempt at the Henning Noorgaard table, I thought I would need a quick and easy project to boost my woodworking self-esteem. I happened to have a Hock marking knife blank rolling around, and determined this was the perfect time to finish it.
I had a piece of ebony that has been rolling around for a while. Probably about three to four inches wide, and about ten inches long, and around 3/8 or 1/2 inches thick or so.

I really don't need another knife, as I have a perfect one already. A Blue Spruce with a curly maple handle. I can't say enough about this knife, other than it is perfect and I love it.
I think that the plan will be to get my knife to feel as much like the Blue Spruce as possible. That is, without a lathe.

I forgot to take some pictures at this point. I cut the ebony blank to length, and then plowed a 1/4" groove on either side to a depth a little more than half the thickness of the blade. Next, I ripped both grooved pieces off the ebony blank and kept the offcut.

I mixed up a small batch of epoxy, with a bit of black tint in case there are any gaps.


After a day in the clamps, this is what I got:
I think this could be done a bit neater with some proper layout. I decided just to taper the handle on opposite sides until it looked right, then taper the other two sides to match.


These are pretty much the only layout marks I used. Some pencil scribbles that really don't show anything.
Once it was foursquare, I just planed some chamfers on the edges, and rounded the top with a rasp, a file. I sanded the whole thing to 600 grit, pollissoired the crap out of it, and applied Renaissance Wax.
Here are a couple more glamor shots. 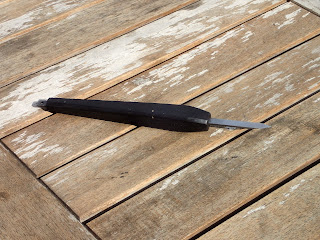 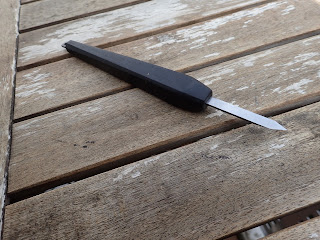 It is a little less than perfect, but I love the way it feels in my hand. There is one bug hole that goes all the way through. It can be seen in the last photo. But, I guess that makes it look more like wood and less like plastic.

This is a fun project, and I look forward to using the knife. Being O1 carbon steel, it is easy to sharpen. The big difference between this blade and the Blue Spruce is the Hock is much thicker. I'll let you know if that is an advantage or disadvantage.

So far the big disadvantage with the Hock is the price. It is not much cheaper than buying the Blue Spruce complete! I might be interested in making one from untreated tool steel, as that stuff is only a couple dollars. However if the point is to have a home made tool, I really like this one.
Posted by Brian Eve at 9:17 PM