Last fall I finally finished the walnut dining table I had been working on for the last couple of years.

The main reason I got hung up with this project, is the stock that I had chosen for the top had crazy reversing grain and produced tear out when it was just looked at wrong.

I tried everything I could think of.  I sharpened my blade on LV bevel up jack plane.

I tried the 37 degree blade in that plane.

I tried the 50 degree blade, which resulted in a 62 degree effective angle on that plane, which should be enough to tame the worst wood.

I tried my #80 scraping plane.

I finally used a hand scraper over the entire top to get a top that had no tear out.  The only problem with this is the table now didn't look flat.

I hated this look.

Don't get me wrong, I am extremely proud of this table, it looks gorgeous -

- In the right light.

It is difficult to photograph, but in the wrong light, it looks a lot like the following picture:
This is the only project I have done in the last couple of years that I couldn't smooth satisfactorily with the tools I had - i.e. my BU jack.

I therefore paid close attention when Christopher Schwarz announced he was going to use a #2 smoother for a year, and Richard Maguire started a series on cap irons and tear out with his #3 smoother.

I decided I needed to find a small smoother with a cap iron rather than one with a high angle and a tight mouth.  After striking out on eBay, I found the perfect plane at Handworks in Amana.  A Stanley type 10 #3.

Planing this table top isn't the catastrophic extremity that you might think.  The finish is just burnished bee's wax.  That's it.  If I decide to leave half of the table the way it was, the wax finish should theoretically be able to be re-applied to the table with none the worse for wear.  Time to get my new secret weapon out.

I monkeyed with my new plane the other day, sharpening the iron and setting up the cap iron like the Schwarz and Richard Maguire said.  Tonight, I decided to go for it and try it out on our dining table. 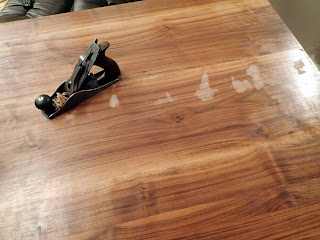 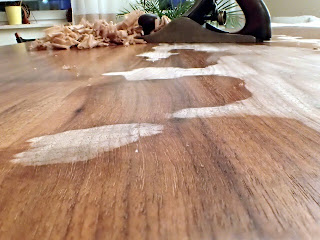 The first couple swipes showed how not-flat the table is.  However, I was astounded that this plane worked easily where so many of my previous attempts failed.

The secret is the cap iron being set as close to the cutting edge as humanly possible.  I was getting absolutely no tear out, going either with the grain or against it.

Just to prove it, here is a photo of how wide I have the mouth set on this plane:
This was utterly amazing to me.  I would say that I am getting to the point in my woodworking that it is getting hard to utterly amaze me, but there you have it.
I do have to admit that I have very little experience with a bevel down smoother.  One of the reasons I haven't got one, is that with bevel down planes, I think you probably need three:  a jointer a jack and a smoother.  I can do a lot of these tasks only with my BU jack.  I haven't ever run across a wood that I couldn't smooth with that plane.

I decided that this project was worth the investment in a new vintage tool - if it worked.  Boy am I glad I did.

I have a feeling that every once in a while a dedicated smoother is required, so I think that this one will be it.

The only problems I came across is that after a while, a shaving got caught under the chipbreaker.  This was expected, as I couldn't quite get the chipbreaker to fully close up to the original iron.

I also found out that this table top requires the blade to be super-hyper-freaking sharp in order to work well.  I did wind up with some microscopic tear out toward the end of my planing session that wasn't there at the beginning.  Unfortunately I don't have my sharpening stones here, so I'll have to finish this task up another day.

I like the steel on this iron, and I have no problem with using the original thin iron.  The only problem is there is only about 1/4" on the iron left until I run in to some pitting, and the cap iron isn't quite what it used to be.  I am a bit undecided at what to do to remedy this.  I could buy a new cap iron and blade from a company like Lee Valley or Hock, but I could also get a vintage replacement.  I think a vintage Swedish blade and chipbreaker would be cool.  I could also spend some time and research rehabbing the one that is original to this plane. 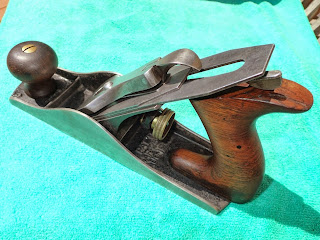 I really like the look of this old plane with the low front knob. 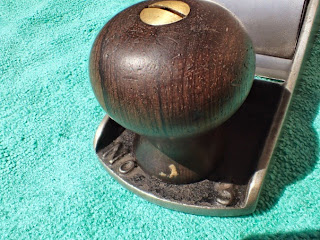 The type 10 was manufactured between 1907 and 1909, according to the internet.  There are some real neat features from this time period. 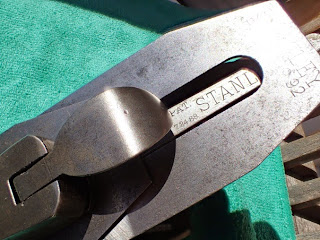 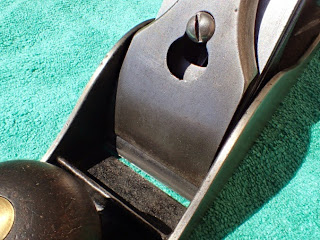 You can tell it is a type 10 because it has two patent dates (unlike the type 11 which has three), and there is no frog adjustment screw.

The frog adjustment screw would be nice, but I figure once the frog is set, there shouldn't be much need to muck with it on a dedicated smoother.  Plus, my intention is to keep the mouth relatively open. I thought it was neat that this was a model #3C.  That means the bottom has the corrugations.  I don't think they do much other than look cool.  But hey!  It is cool to look cool. 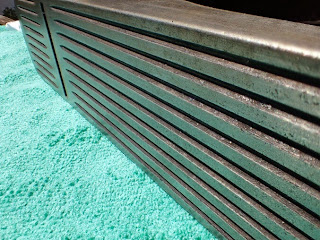 Just look at the frog:
I think the blade says, "STANLEY - PAT. 4/19/92."  I mistakenly thought that this was a later blade, but it turns out it is from the time that this plane was made, so my guess is it is original.  If it was in good shape, it would be worth as much as I paid for the whole plane all by itself!  I like the steel, it sharpens up nicely. 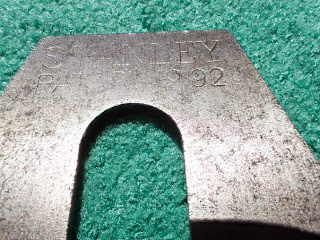 Overall I am extremely pleased with the plane and it's performance.  The walnut on this project was extremely frustrating to deal with, and this little smoother seems to be capable of taming it nicely.

My plan is to smooth the top until it looks good enough, then re-finish it.
Posted by Brian Eve at 11:23 PM