Tonight was the night for heat treating my plane irons.  I figured it would only take about a half hour, and I wasn't too far off.

I think I was worrying too much about this step, and it put me off.  I needn't have worried, this was relatively easy.  At least, I accomplished what I meant to.  We'll see if it gives me good steel or not once I sharpen them up.

My plan was to use my barbecue on the balcony for a platform for doing the heat treating.  This was a really good idea, as my set up didn't need to be anything crazy.
I bought three fire bricks at the big box store yesterday.  I also picked up a special teflon-infused fire glove.  This turned out to also be a good idea, because it kept me from burning my hand while still being able to use my fingers, unlike using an oven mitt.
I bought an old pot today at the thrift shop.  It was only $2, and almost too nice to use.  I think it is cast iron with an enamel coating.  Plus, there was a lid which I thought was a bonus.  Handy for when the oil catches fire.  Outside of this picture was a fire extinguisher, just in case.

I hadn't done this before, so wasn't quite sure the best way to go about this.  I set the fire bricks up this way in order to best hold the heat in the spot where it counts most.

I think this was a good idea in theory, but the torch used up all of the oxygen in that corner and wouldn't burn properly.
I asked the Frau to take photos of this whole process, and when I looked for her while I had the torch going, she was no where to be seen.  As a result, you'll have to paint the picture using only my words.

It took a little while to figure out the best configuration, but I finally got the torch working best when it was shooting the flame at a bit of an upward angle.  It was plenty enough to get the iron hot if I held the iron as flat as I could against one of the side fire bricks.

It turns out the fire bricks hold heat for a long time, so next time I will pre-heat the iron while it is laying flat (to get that nice dark color), then lift it up so the business end of the iron is flat against the side brick and I can torch the crap out of it in that position.

Once it got red enough, and the little pools of iron float to the surface, quench.

Next time I bet this only will take five minutes for the two irons, after everything gets warmed up.

I think I wound up with a couple of decent irons.
Now all that is left is tempering.  I haven't told the Frau I am using her oven for this yet.  Wish me luck! 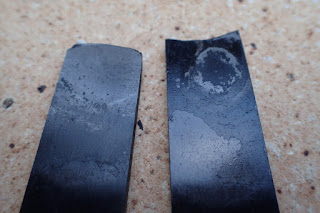 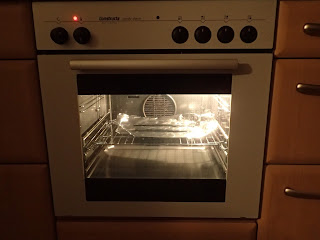