Yesterday I had a really great day.  I got to spend time in the shop, try out a new finishing technique, and meet a fellow woodworking blogger.

Perhaps I should explain.

Not long ago, I noticed a cool woodworking blog:  Snakeye Woodworks.  The author and I have made a few comments on each other's blogs, and we also have in common that we are both in Europe affiliated with the US military.  It turns out he is moving from Italy to England, and on his way past Munich I suggested we get together for a beer.

I decided that I was going to impose upon him one of my try-squares, as I needed to do a post on them again, anyway.  So, I built two.

Of course I restricted myself to my Beginner's Tool Kit (essentially a jack plane, two chisels, a Japanese saw and some marking tools), and added a router plane on one of the squares so I could show how to use this tool to facilitate making lap joints.  I think I'll save that for a future blog post.

However, I will talk about the new finishing process I used.  I needed something fast because I procrastinated with this project until the day of his arrival.  So, I had about three hours in which to cut the joints, glue up, and finish this project so I could present a finished product that evening.

No problem.  I knew I could cut the joints no problem, I have  been practicing this.  I settled on white PVA glue, as I could take it out of the clamp after about 30 minutes.  But to also finish it?

A perfect opportunity to whip out my new polissoir.  This is a recently re-discovered tool by Don Williams, who started using one after reading about it in the Roubo translation he is working on.

These things are awesome.

Essentially, it is a handful of broom straw tied together tightly and trimmed.  I have been using one the past several weeks as a burnisher.  In other words, I have just been using it dry as a final treatment before applying any kind of finish.  It really shines up the bare wood nicely.

I was so impressed with this, I was scared to use it with wax and contaminate the straw making it unusable in this fashion any more.  So, I ordered another one.

Following the directions sent out with the polissoir, I had to find some bees wax.  I think any furniture paste wax will do, but I couldn't resist the stuff at Dictum.  This is a really fine product, with a lot of pure beeswax and carnuba wax in it.  The other stuff I bought at the big box store said it contains beeswax, but looking at it's ingredients it is apparent that there is only the smallest amount there.

I heated some of it up in a double boiler (while the Frau wasn't home, of course) and let the polissoir soak up as much molten wax as it could.

Just before glue up on the pair of new try squares (walnut and oak), I burnished the wood, and then used the newly-waxed polissoir to waxify them.
HOLY CRAP!  This thing works good!

I just wiped some wax on the wood with a paper towel, dabbed the end in the wax container and started scrubbing the surface of the wood.  Here are the results right after glue-up: 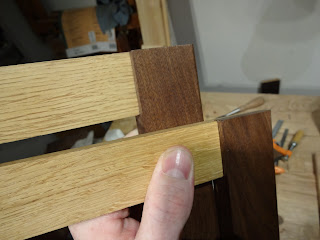 Snakeye paid me the best compliment possible when I presented him with his new try square.  He asked if I could blog about the finish, as he felt his finishing skills needed some help.

This wax finish is incredibly easy, and looks really good.

We had a really nice evening drinking some of the local nectar (Tegernseer HofBräu) and chatted about woodworking, and other things.

He really is a nice guy and has a beautiful family.  Check out his blog at: