Magic Tricks from Olav the Great

Since I returned from Denmark with my mostly-completed chair packed in the trunk stacked neatly in pieces, I haven't had the opportunity to work on it.  This has been driving me crazy, because Jonas finished his settee while I was still in the car driving back home.
I have some time today and tomorrow to spend in the shop, and hope to make progress on it.

Meanwhile, I sent a note to the third member of our band of wood-hooligans, and asked him if he has finished his chair yet.  Olav sent me the following response:

Hej chairmaker Brian,
nope, I havn’t finished the chairy work because of the necessity to get butter on the bread.
Just drilled a couple of holes into the wood.
But:
I remembered some utilities for the workbench, I once had seen and recreated them.
I hope the pictures will tell the rest.

Remembering the weekend of the brothers in wood
your 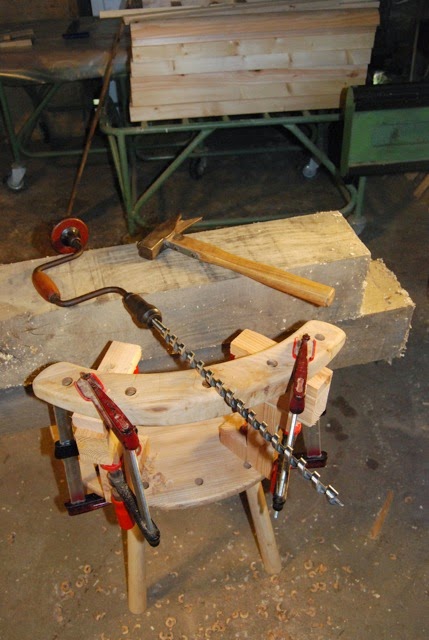 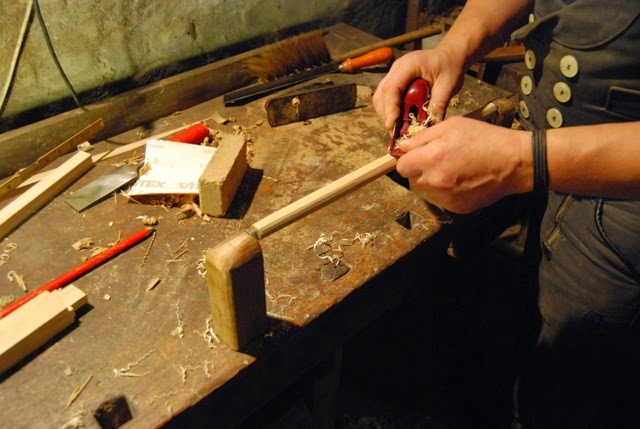 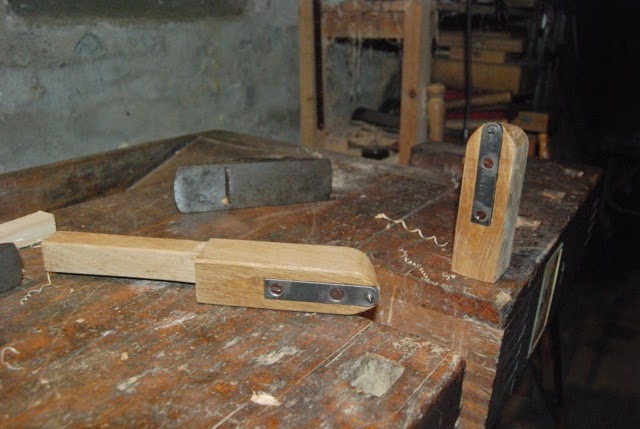 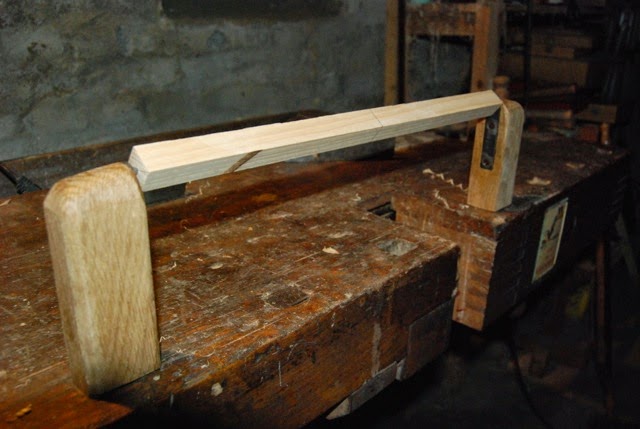 Olav is a self-employed carpenter, so has a collection of some pretty cool tools, including the super-long auger bit in the first photo.  This allows him to mock-up his arm rail to it's actual height, bore the hole at the correct angle in the arm, and then bore the hole in the seat with the auger still in the hole from the arm.  I think it makes for correct angles on everything without doing too much triginometry and advanced rocket-surgery.  I plan to do the same with my chair, only I have an auger bit extension from eBay rather than a super-long electrician's auger bit like Olav.

The next photo shows a pair of what another woodworker described to me as "bench puppets."  I'm not sure of the term as it doesn't sound manly enough, like "sphygmomanometer," but that word was already taken.  This looks like a fantastic way for making square sticks round with a plane or spokeshave.  I'm thinking they could be made with a nail for a pivot point, but Olav used what looks to be hinge parts that he filed to a point.

My guess is that his sticks turned out a lot rounder than mine have.

Looking at these photos reminded me of another example of Olav's cleverness with a tool he whipped out to help him mark out octagons for his tapered legs.  Before he rounded them off, I was amazed at how perfect his octagons were, as mine looked more like a Picasso experiment gone wrong.  I spent a lot of time trying to lay mine out using tricks that I thought I understood, but wound up just eyeballing the octagons with limited success.  Olav's were spot-on using this simple jig he spent about 30 seconds making: 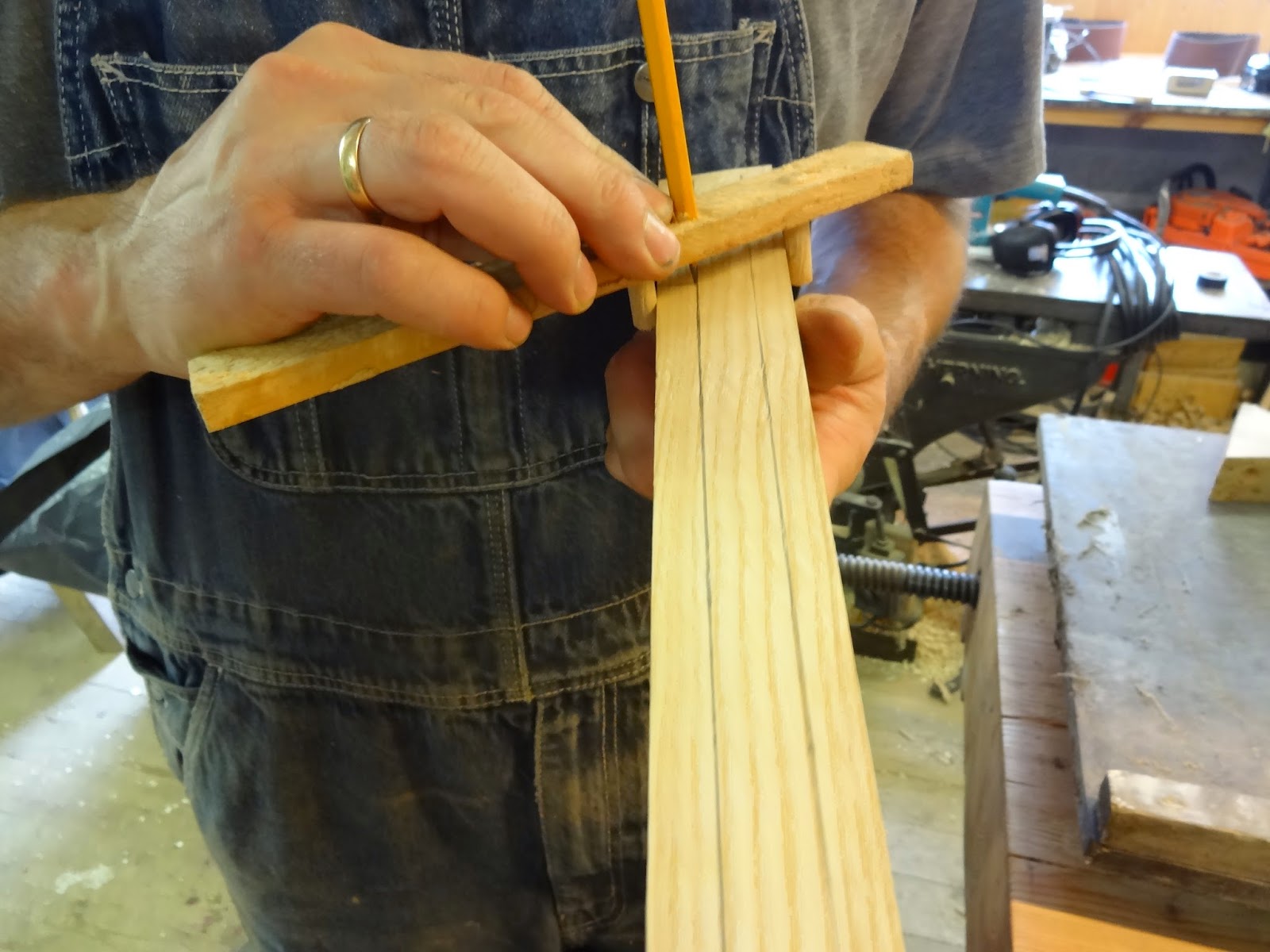 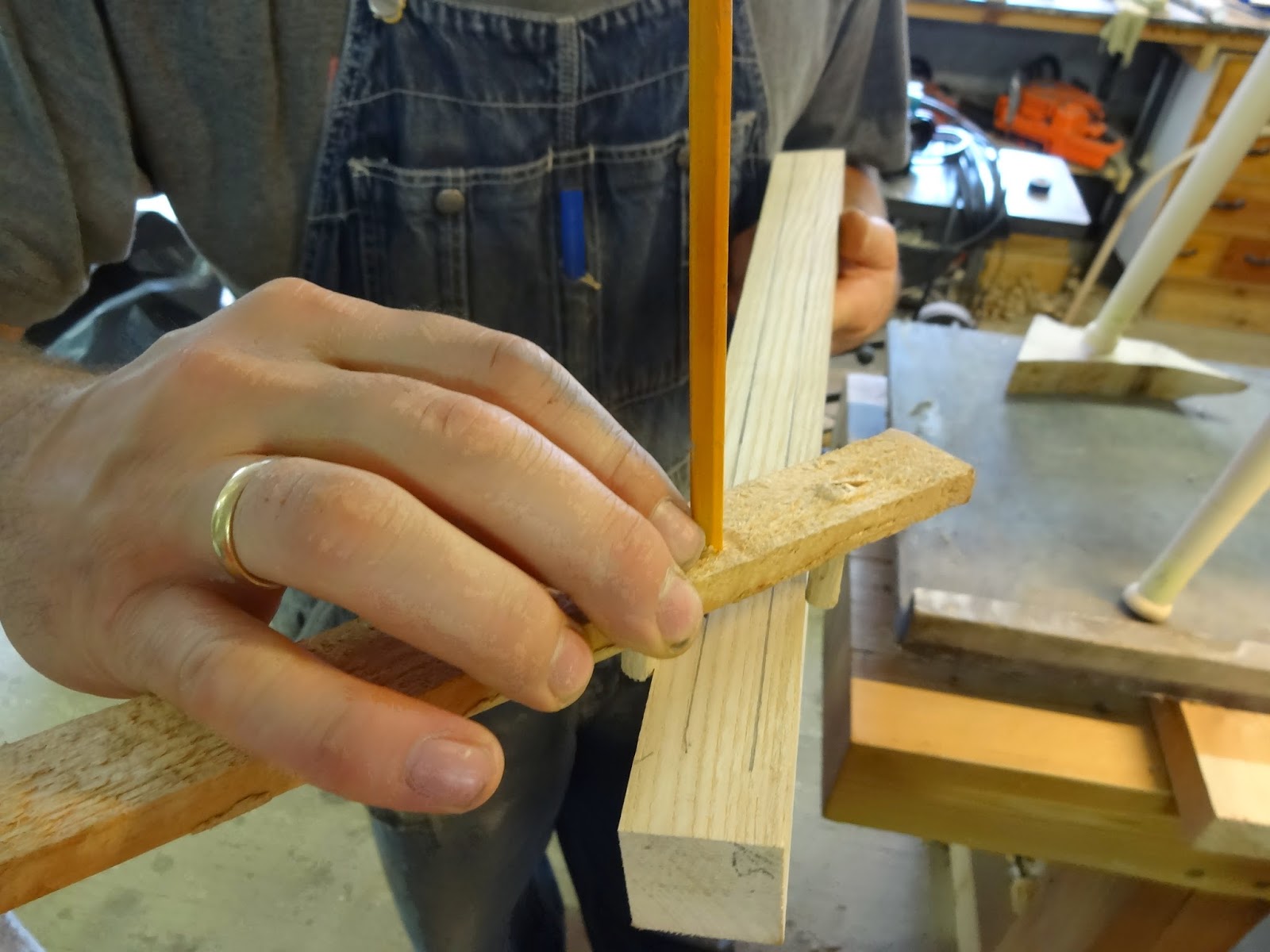 It works on straight stock as well as tapered, and will layout a perfect octagon of any size you need.  It is constructed much like a center-finding jig, but instead of the pencil being in the center, it is offset a little bit.

Centimeters, inches, miles, it doesn't matter.  Take a stick for your octagon-maker, mark a spot for one of the dowels, from there go out three units (I would just eyeball a length on your dividers, and step off three steps), make a mark, step off four units, make another mark, then step off the final three where your second dowel goes.  The hole for the pencil goes in one of the center marks.  If you look at the first photo of this tool, it will make a bit more sense, and you can actually see the unused mark on the side opposite the pencil.

Olav, you get the prestigious notoriety of the Toolerable Jig of the Week.

OK, I just made up the Jig of the Week, but "sphygmomanometer" is a real word.