Progress on the Bench

While I seem not to be breaking any speed barriers with this build, I do like to make sure I at least accomplish something in the the shop every once in a while.

Here is what my bench now looks like after today: 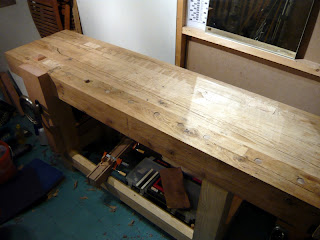 Being frustrated about not getting much woodshop time in lately, I have not gone out of my way to ensure I have photographic evidence of the details for the blog.  So, here is where I'm at:

I finished boring the dog holes a week or two ago.  I took more video, but thought I would spare you of yet another brace and bit video.

Today I finished all of the dogs for the holes!  This was a lot harder than I thought, because the walnut one inch dowels I bought were oversize by about a tenth of an inch.  First I tried widening my holes with sandpaper wrapped around a smaller dowel.  This took forever, as the oak top is almost 5 1/2" thick.  Sanding the dowels down in diameter that much took forever, too.  If I'd have done them all that way, I would be working on this for years.

In the meantime, a box arrived from Joshua Clark again.  This time there was a sweet screw-arm moving filester and three singleton hollow and round planes.  Why singles?  Because I think I would like to take a stab at building my own, and thought a few examples would be helpful.

Lucky for me, the only hollow was a #12, which cuts a round with a 3/4" radius.  A #8 would have worked perfectly for these 1" dowels, but since I didn't know that this is what I'd use them for, I figured I couldn't be picky now.

The hollow worked really well for taking this much off of the dowels to make them fit.  Because it was oversize, there are some facets on the dowels now, but it was much easier than using a block plane with a flat bottom.  A bit of sandpaper and they went in nice.

The dogs are staying put as of now with just a friction fit.  But, eventually I might install a wooden spring on them to keep them in place.

I think the wooden dogs are great.  For the price of a single metal one I installed a dog in every hole.  Plus, they won't hurt my tools!

You can also see that it appears my vice is installed.  It isn't quite finished yet.  It still needs the rollers and some final tweaking before it will be done.  I did get to use my expanding bit and a big-honking #24 Irwin auger bit on the chop.  That was fun. 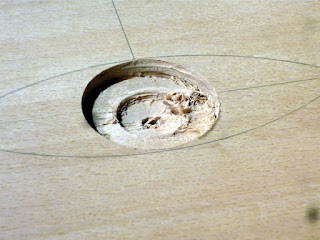 Stay tuned for the completion of the vice and flattening of the top!
Posted by Brian Eve at 7:04 PM