Even More Regarding the Brace and Bit

I got a little shop time yesterday, and was able to finish my dog holes.  I continued with my brace and bit, with the one inch holes you may have seen in a previous post. 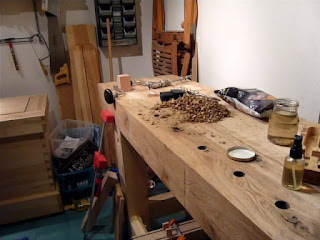 To solve the problem this time, I had intended to drill the hole all the way through so I could push the dog up from the bottom.

Needless to say, things didn't go right.  I ran my brace into a broken lag bolt (ruining my bit), and no farther can I drill.

I fixed the problem by inserting a magnetic cabinet door spring thingie (not sure the technical name), which now ejects the dog when I want.  I drilled a hole in the center of some 1" dog stock, inserted the cylindrical contraption and drove that to the bottom of the dog hole.  Now there is room for a short dog above this mechanism.  When it is engaged it allows the dog to sit flush with the bench top, and when engaged again it pops out about 1/2." 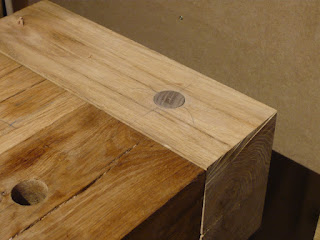 A good woodworking friend from Denmark brought his family to visit, and he brought me a gift: 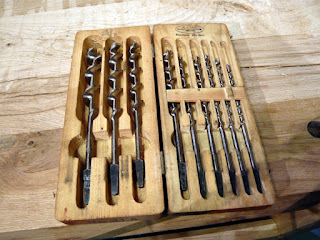 He read on this blog that I wrecked my 1" brace bit, so he brought me some really nice Irwin style bits made by C.I. Fall in Sweden.

About the same time, Joshua Clark sent me a new Jennings style replacement.  Neat!  I have two different styles to try out next to each other. 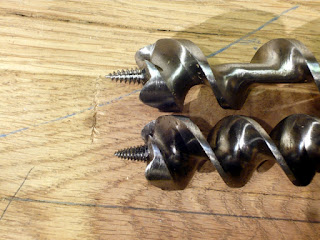 I sharpened them both using a trick I just discovered in Aldren Watson's book.  Instead of using my auger bit file, I glued some sandpaper to a piece of scrap about the size of a popsicle stick.  This worked great, and I highly recommend it.  The big advantage is that I think it should allow the bits to last longer.

The file is a bit course, which leaves the bit sharp enough to cut well, but it takes off a lot of metal.  I tried a few different grits of sandpaper, and found that as long as there wasn't major shaping to do, that 320 grit worked nice in the fact that I was able to touch up the edge without grinding an entire new cutting surface.  I think I'll only use the file when I need to re-establish a fresh edge.

I found the Irwin style bit cut just as well as the Jennings.  My feelings at the time were that I might be able to steer the Irwin at the beginning of the cut a little better, but that the Jennings was easier to turn in this nearly six inch thick oak.  I think some more testing is required for me to really learn the advantages and disadvantages of each.  I was able to get straight holes with each, and they both looked smooth enough for my purposes.

One thing to note, that the lead screw on the Irwin looks coarser than on the Jennings.  I don't believe this to be true.  Joshua Clark told me that the appearance is deceptive because the Irwin has a single thread, and the Jennings a double.  I didn't time anything, but I felt the Jennings in my test actually may have cut faster.

Now, I only need to drill 3-4 more holes for holdfasts in this 5.5 inch oak, and I'll be done with this grueling task.
Posted by Brian Eve at 9:43 AM