"Mouldings in Practice" - A Non-Traditional Review

I couldn't stand it anymore.

Because of where I live, Media Mail from the USPS takes weeks and weeks for delivery.  So, even though I pre-ordered and I got a note from John at Lost Art Press that it shipped with everyone else's, I still have yet to take delivery.

So, I bought the e-book.

My review:  It was awesome.  You should read it.

I'm not sure what has interested me in hollows and rounds lately, because very little of my work requires moldings other than a chamfer here or there.  I bought Larry Williams' DVD not long ago, and have been fixated on making some.

While reading this book, it dawned on me that the first time I use a moulding plane may be with one that I made myself.  And, the first one I'll probably need is a rabbet plane.

There is an old rabbet plane in my tool chest.  Back when I was hoarding every tool without really knowing what to do with them I picked up a nice little 1 1/8" inch rabbet.  I always thought it was of low quality because I couldn't get it to do what I wanted.  Turns out what I was trying to do with it was make it work as a shoulder plane.  Also, while trying to flatten the sole at one point I tore up a freshly sharpened plane blade when I ran over a nail driven into the sole.

Long story short, this plane has been knocking about for some time without any intention of me using it.

So, I thought it must be time to re-evaluate and see what can be done with it.  The worst I could do is ruin it so it was worthless to use or collect.

No big loss, since that is pretty much the state it is in now.

The edges of this plane were rounded over just like the book says many old rebate planes.

So, I drilled a couple of 1/8" holes next to the nail so I could grab it with some needle nose pliers.  Don't ask me what a brad nail was doing in the sole of this plane.

I planed off about 3/32" from the sole to get to flat wood, and glued on a strip of some mystery tropical wood that I've had for more than ten years.  Probably rosewood.  It should be nice and hard and work will with tracking a gague line.

The only problem was that in my zeal to ensure the strip was even on the plane's width, I didn't notice that it is not overhanging the front like I intended.  It is just a shade short of the front, so I'll have to see what to do to make it look pretty.  This shouldn't affect it's use. 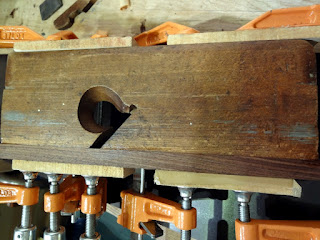 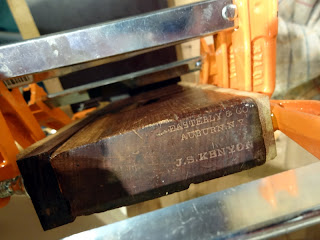 Once the glue dries, I'll plane the strip down to dimension with the intention of changing the dimensions of the plane as little as possible.  I'd rather not remove the patina, but if I do, no biggie.  This will be a user, and I think an hour or two of labor for a functioning tool is a good investment.

Sawing the mouth out should be fun, but with a couple of floats I should be able to get it to work.  With careful sawing, there should be only clean up.

But, this is me we're talking about.

Of course, you'll be the first to know my progress.  Hopefully you won't see this plane on eBay, and if you do, you'll know not to buy it.
Posted by Brian Eve at 9:56 PM