It has only been three weeks since I constructed these two panels, and I have successfully screwed one of them up so bad that it could never possibly be used in a furniture project.

Let me back up a bit, just in case you haven't been following this series.

An aspiring woodworker posted a photo on reddit.com wondering why the top on the table he constructed cracked and split.  I had a similar experience with one of my first projects, too.  There were a broad spectrum of comments with well meaning woodworkers giving advice.  I disagreed with most of them, as I thought the only thing he did wrong was to glue his cross-batten that was intended to keep the table top flat.

I decided to prove the point that I would construct two identical panels.  One was a control, the other is my attempt to recreate the failure.

I decided to go all out to try to prove this point.  I used fresh construction lumber straight from the home center.  Lumber from the home center is notorious for not being as dry as it should be.  Using this stuff without letting it acclimate is a recipe for a lot of wood movement.

These boards were 1" x 6" pieces of some mystery wood - probably spruce or fir.  I endeavored to pick boards that were straight along their length, but I purposely picked flat sawn stock rather than the much more stable quarter sawn variety.

I oriented the boards so the center of the tree was facing up on all of the boards.  It is frequently stated (and indeed one of the commenters of the reddit post) that alternating growth rings can result in a more stable panel.  A flat sawn board will cup toward the bark side of the tree.  The thought is that alternating growth rings can cancel out the overall effect.

Instead of using a sliding dovetail for the batten like the reddit poster, I only screwed each batten in with three wood screws.  I drilled pilot holes, and I elongated the holes on the outside of the battens to help allow for wood movement.  I used screws because I have used this technique with success on several projects that I have in my home.  Plus, since this isn't a project that will turn into a real piece of furniture, I wanted something quick that wouldn't take too much time away from other projects.

One of the panels got a healthy amount of PVA wood glue on the battens.

So, here is the result after only three weeks. 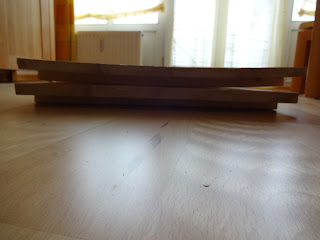 The bottom panel is the one that received no glue.  As you can see, it is still as flat as the day I constructed it.

The top panel looks like a banana.  I was hoping for cracks, splits, and general mayhem, but this failure is good enough.  I think it is clear that no one would want to use this as a table top, a door, or a lid to a chest.  If you hold the edges of the two panels together, the gap on the other side is almost an inch and a half (3.7 cm). 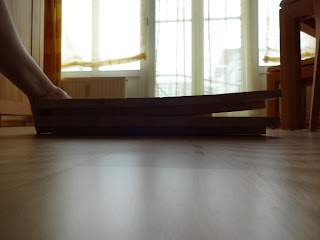 In a way, the real gem of information in this experiment is with the panel that stayed flat.  I found the fact that this panel turned out fine to be revealing.  After using every supposed technique to ruin this panel, it is fine.  I think in the future I won't stress about potential glue up failures as long as there is a good cross batten attached with thought to wood movement included.

There are many ways to stabilize a panel besides using the screwed on batten like I did.  This method is probably the weakest of all, yet it worked perfectly on an obviously difficult piece.  I am sure results would be similar with sliding dovetails, breadboard ends, or any other traditional method.

One other thing I wanted to test was how a panel with no battens would hold up.  Alas, as I processed this lumber with a hand plane, I couldn't bear to plane up a third panel for this test.  If I had, I would suspect that this panel would have warped, too, but toward the bark side of the tree.

It is interesting to look at the warped panel for some information.  The curve of the warp actually goes toward the heart side of the tree.  Why did it warp this way, do you ask?  The answer is because wood is incredibly strong along it's length.  When I glued the batten on, it locked that side of the panel to a fixed width.  Since wood moves no matter what, something has to give.

In this particular case, when the wood in the panel dried out as it acclimated to my shop, the panel actually got narrower across it's width.  Since the batten was forcing that side of the panel to remain it's original width, the panel had no choice but to curve away from the batten.  This force is much stronger than what is needed to keep the panel from warping.  In fact, as we can see from the other panel, the flimsy offcut used as a batten is all that is required.

I'll keep these panels around for a while to see what they do over the long term.  I might get lucky and get an even more spectacular failure.  For now, I'll call this experiment a success, as the failure obtained is more than enough to ruin any project.

What I have learned is:
I'd love to hear your experiences with gluing up panels.  Please leave a comment!

The first two posts in this series are here: