Experiment: Let's Blow Up a Panel!

Today, I made something that I fully intend to fail.  In fact, if it works, the failure is a success!

It would be amusing to someday say that at work.

The last couple weeks I have been hanging out at reddit.com.  There is an enourmous woodworking clan there.  Just go to the site and search for "woodworking."

There are a lot of folks out there excited about woodworking, and it seems that hand tool woodworkers are still in the minority.  At least at reddit.

One post really got me thinking, though.  One woodworker built a table, and posted pictures, asking why reddit readers thought that the main panel cracked and split.

Looking at the photos, I immediately recognized the problem, because I learned the exact same lesson the hard way.  During the build, this reader made a panel out of home-center wood, and glued in a sliding dovetail cross-batten.

Wood will move.  If there is something glued cross-grain to a panel, something will break so the wood can move.

I was surprised, however, that there were a plethora of different answers.  There were suggestions from ripping the lumber into narrower pieces before laminating them together, alternating the growth rings up and down, using different species of wood, etc.

So, after putting in my two cents, I decided I would put my money where my mouth is, and attempt to recreate the failure.

I went to the local home center today, and bought some (probably) spruce 1" x 8"s, from the front of the stack.  Construction lumber from the home center is notorious for being high in moisture content, so there should be a pretty dramatic effect.  I bought enough lumber to make two test table tops.  Oh, and on the way to the cashier, I decided to have them cut it all to length on the store's panel saw.  Hey, it's free, and there is no point in doing any more work than necessary for this.

The first panel turned out really nice.  I was careful to plane each board four square, and the glue up went off without a hitch.  But, processing that much lumber by hand is a bit on the tedious side, so I thought I would skip a step for the second panel.  I just jointed the edges and glued it up.

I was right, this was a lot faster, but while it was sitting there in the clamps it dawned on me that every joint was off a degree or two due to the reference faces being rough.  The panel already had a dramatic curve.

I broke it apart, and started again.  This time I tried the best I could to compensate, but it still wasn't as flat as the first one.  But, I think it will still work, so I cleaned it up the best I could.

I didn't want to go through the trouble of cutting sliding dovetails for this useless project, so I decided to screw on the battens.  I have used this technique many times before, and I know it works.

The first panel (the nice one), I glued the battens on and drove three screws.  The second panel, I elongated the screw holes on the outside of the battens, and only screwed them with three screws each. 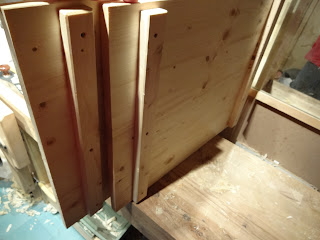 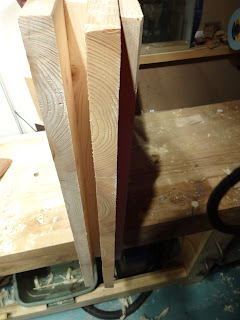 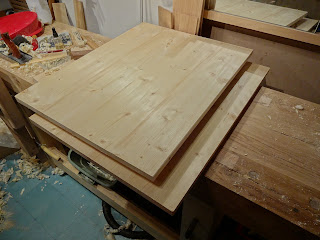 Each panel has four 15 cm wide boards.  I picked stock that was as evenly flat-sawn as I could find, and I oriented the growth rings so that the show face of both panels shows the interior side of the tree.

My prediction is that over the course of the next few weeks, the panel that I glued the battens on will split, crack, and generally fail.  Hopefully in the most spectacular way possible.  The other panel is my control, and I think it should stay fairly flat.  It might warp some, or it could cup, if the battens aren't strong enough, but there should be minimal cracking.

For this to be a true scientific test, we should do about a dozen of each of these to see if the results are consistent.  Wood, after all, can be unpredictable.  Also, it would be interesting to try some other configurations, i.e. alternating growth rings, bark side up, etc. just to see what these techniques do.  Any takers?  My arms are tired.

Since I used spruce from the home center, I would guess that properly dried wood of quality from a reputable lumber yard would have less dramatic results.  On the other hand, I had a walnut chest lid twist up like a pringle over night when I glued the battens.

Now, we wait.  I'll post the results of this test as soon as something happens.

Email ThisBlogThis!Share to TwitterShare to FacebookShare to Pinterest
Labels: Techniques